I hope you all had a great weekend! We didn’t have the best of weather, but we still managed to have a great weekend. Our farmer’s market opened this weekend (yay!!!), so after Burn Boot Camp, I wandered around the Farmer’s Market and picked up some veggies for next week. I then had a coffee date with a friend at Moonbird Coffee where we spent nearly two hours catching up! It was wonderful. The weekend also consisted of family time and a date night with David. Does the weekend have to end???

Also, do you all like seeing what we had for dinner every night? Or should I just do memorable meals? Sometimes our meals are less than exciting, so I’m not sure they are worth talking about. Or do they still give you ideas of things to cook for your family? Let me know! 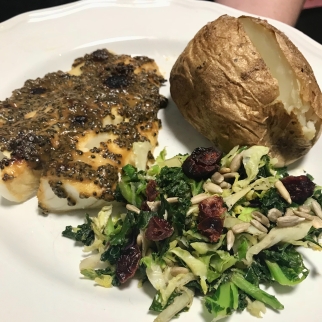 The photo makes the cod look a little unappealing, but I promise tastes quite the opposite! This is our favorite cod recipe, and it’s fun to make too! You toast mustard seeds on the stove until they start to pop, and these add so much flavor to the rest of the marinade. I also sauteed TJ’s cruciferous Crunch slaw in some olive oil and lemon juice and added a baked potato on the side.

Remember when I made this a couple of weeks ago and said it was so darn spicy? Well, I decided to add a half a can (¾ cup) of canned coconut milk to the crockpot because I was sure that that would make it creamier and less spicy. But nope, it tasted the exact same and still super spicy! I mean, it was still really good, but I want to figure out a way to lessen the spice. Maybe I’ll add less hot sauce and increase the coconut milk and/or add (non-dairy) yogurt? I’ve seen some recipes using yogurt. Any ideas?

I diced up some white potatoes, threw them in a cast iron with some kerrygold butter, garlic, chili powder and oregano. When the potatoes were almost done, I cracked a couple eggs in the the skillet with the potatoes and let them cook. Super simple.

I put the leftover chicken over cauliflower rice for me, but I switched it up for David and made him a buffalo chicken quesadilla. David will never turn down anything in quesadilla form, and I think the cheese and tortilla helped to tone down the spiciness too.

It was someone’s birthday in our small group, so we decided to make it a celebration, and we all brought a dish to share for dinner. I brought a spinach salad with cucumber, green peppers, carrots, avocado and toasted pepitas. I also made two homemade salad dressings: maple balsamic vinaigrette dressing from this salad recipe and a Honey Mustard Vinaigrette. We also had grilled chicken and veggie kabobs, and a delicious lemon and dill quinoa salad. We ate on the screened in porch and it was a perfect meal for a warm spring evening!

Also, if you have never toasted seeds or nuts for a salad, you must try it asap!!!

What I do: I add some seeds or nuts like sliced almonds, sunflower seeds, or pumpkin seeds/pepitas to a baking sheet, spray with a little coconut or olive oil, sprinkle some sea salt, and then roast on 350 degrees for 5-10 minutes. Make sure to watch them closely because once they start to toast, they will toast FAST. Also, you’ll want to make extra because you will eat half of them before they even get to the salad. So addicting.

The key to a satisfying entree salad is all the toppings! I had a lot of salad fixings left over from Thursday, so I topped the spinach with cucumber, green pepper, peas, roasted brussel sprouts, roasted sweet potatoes and toasted pumpkin seeds. I then baked salmon with lemon juice, olive oil, salt, pepper and garlic on 425 for about 12 minutes. Delicious and healthy!!!

David had plans with the guys from small group, and so I decided to join my mom who was on baby duty while my sister and brother-in-law celebrated their 5th year wedding anniversary! I cannot believe my sister has been married 5 years already! Fun Fact: My sister’s wedding was the first time David met my entire extended family…which he survived, and still decided to marry me!!!

Anyway, my dinner on Saturday consisted of leftover veggies from lunch, the peas Giuliana didn’t eat, and Charles Mathew’s leftover blueberries. And then some cashew yogurt with fruit and nuts when I got home. Not the best dinner, but it worked, and as you mom’s out there know, it’s hard to feed yourself when you are taking care of little ones!

Have a great week! 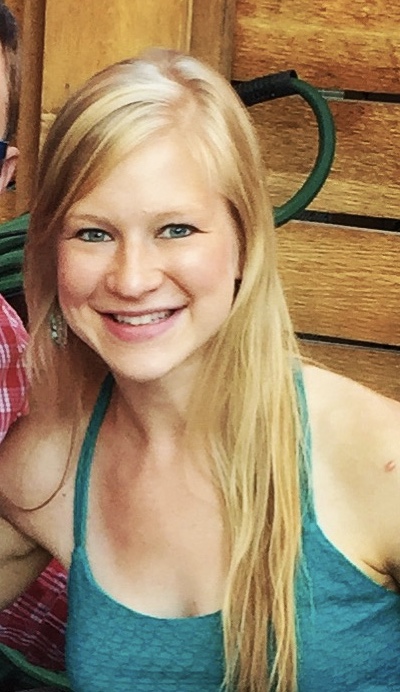 Hi! I’m Jenn! I’m a Nutrition Therapy Practitioner, wife, and lover of chocolate, vegetables and running. I have a passion for helping others discover their own version of health, in a way that satisfies them both mentally and physically.

To stay updated with my life, fur babies, health/nutrition, and all other random stuff I share, follow me on my personal page @jenn.schroeder. I’ll be transitioning away from this account. Thanks!! ❤️
Five years married, a whole lot of memories, and many more to come! Happy anniversary @schroedmachine! #love #marriage #anniversary
Parade watchin’ with my favorite little man and favorite big man. #duluthfallfestival #nephew #hubby #family #familytradition
Happy Fourth of July! Love celebrating by running the Peachtree Road Race with @schroedmachine. And now my legs are dead, and I don’t want to move. #heat #humid #atlanta #peachtreeroadrace #run #fourthofjuly
Friday vibes. #weekend #friday #friyay #furbaby #relax #kitten #joy
Picnic in the park with some of my favs. #summer #summernights #family #love #concertinthepark